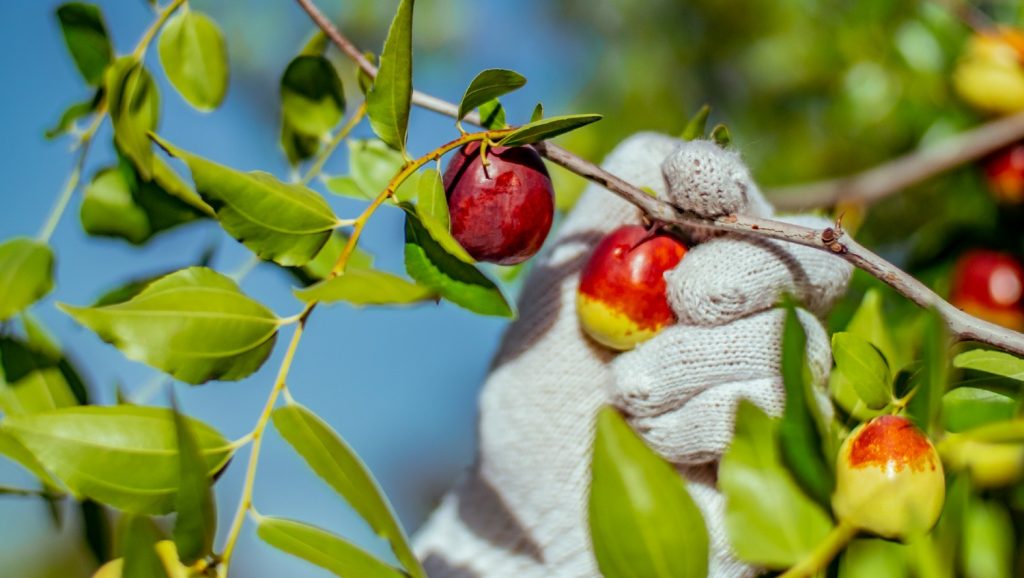 The delicious and highly nutritious jujube fruit, Ziziphus Jujuba or Red Date originates from Asia, mainly in China and the Middle East. Jujubes are rich in antioxidants and contain many health promoting vitamins and minerals. The fruit including the seed and leaf has been widely used as an ingredient in traditional Chinese medicine for thousands of years. It’s high vitamin B and C content in addition to having a chemical compound known as cAMP (particularly in the wild rootstock varieties) means that the jujube is often referred to as a superfood and may have positive effects in helping fight certain cancers and promoting a healthy immune system. There is said to be approximately a thousand different varieties of jujubes growing in China and the Ziziphus Mauritiana, commonly known as Ber, which grows in India.

In Australia, there is approximately 40 different cultivars of jujube although only a select handful of varieties have proven to be the most popular within our market. The jujube fruit itself is tasty and varies in size ranging from 20 – 50mm in diameter. The shape of the fruit has distinctive features from apples and pears (the GA 866 variety resembles the shape of a tiger’s tooth). The fresh fruit is similar in texture to an apple with a crunchy, crisp flesh that surrounds a single stone or pip. It has a thin, dark red skin surrounding a sweet, white flesh.

Another great characteristic about the jujube is that it is delicious to eat as a chewy and sweet dried date. Interestingly, certain varieties are suited better as a semi dried or dried product such as the Si Hong which has a sweet, caramel flavour.

Additionally, dried jujubes are eaten steamed, steeped and infused into jujube tea, made into a paste to accompany a cheese platter or stewed to make a compote. There are endless culinary possibilities to prepare jujubes which are only limited by ones imagination.

A typical jujube tree can grow up to 10 metres in height and varies in foliar density according to the cultivar. However, a jujube tree can be successfully trained along a trellising system for commercial orchard setup.

After travelling to China to find out more about the ancient Ziziphus Jujuba and speaking with professors from Shanxi province, the consensus is that Australia is one the best countries in the world for growing the jujube due to our drier climatic conditions. It is indeed a very hardy tree and once established can survive in extreme conditions.